Celtic Woman Wiki
Register
Don't have an account?
Sign In
Advertisement
in: Past members, Founding members, Mothers,
and 5 more

Órlagh "Órla" Fallon, a singer, harpist and songriter, was a founding member of Celtic Woman. She has a husband named John, a son named Freddie and she had her solo concerts recorded on PBS.

Órla's Celtic harps may have the same number of strings, but they are highly different. One of them is made of redwood and another has a darker shade. Her latest harp has the brightest shade and in different performances, she plays them all. 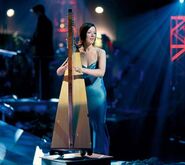 Playing the harp in "A New Journey"

Playing the harp in "A Christmas Celebration"

Singing and playing her harp in her "Celtic Christmas Special"

Community content is available under CC-BY-SA unless otherwise noted.
Advertisement