Chloë Agnew, a founding singer of Celtic Woman, was its youngest member at the time David Downes recruited her into its ranks.

In Celtic Woman: The Show, the team's inaugural program, which was filmed for, and transmitted on, PBS (Public Broadcasting Service), Chloë's version of "Walking In The Air" was the very first performance featured.

Also in A New Journey, she sang two more songs from her solo CD album in different rendtions. She also sang her pop rendition of "When You Believe" in the Isle Of Hope tour and Songs From The Heart.

She later did her rendition of "Nocturne" in two more concerts called Believe and Emerald.

In 1998, Agnew represented Ireland and was the winner of the Grand Prix at the First International Children's Song Competition in Cairo with a song called The Friendship Tree. She then began to perform pantomime at the Olympia Theatre in Dublin and continued in that role for four years.

In 1999, she appeared in The Young Messiah, a modern adaptation of Handel's Messiah. In this production, she played one of the children and performed sign language.

Walking In The Air[]

In relation to the CD version of "Walking In The Air" released in 2002, Chloë made a video released on DVD in Europe in 2004 and in North America in 2007.

Along with all the other original members; Lisa Kelly, Méav Ní Mhaolchatha, Órla Fallon and Máiréad Nesbitt, Chloë recorded their first concert located in the Helix Theater in Dublin on video in 2004. Then, they all began their world tour in 2005 and after Méav's pregnancy, the sixth CW member Deirdre Shannon took her place until 2006. With the seventh CW member Hayley Westenra from New Zealand, Chloë and all the other original members recorded the next concert called A New Journey in Slane Castle. A few years later, with eighth member Lynn Hilary and ninth member Alex Sharpe joining the group with the departure of Hayley, Méav and Órla, Chloë, Lisa K and Máiréad began their concert tour called Isle Of Hope based on Irish-American history. They also recorded the next concert called Songs From the Heart and started the tour until Alex's departure. Chloë, Lisa K and Máiréad finished the tour with the tenth member Lisa Lambe taking Lynn's place. They also recorded the concert called Believe and due to Lisa K's pregnancy for her fourth child, the eleventh member Susan McFadden now takes her place. They recorded a new concert called Emerald in South Bend and after this, Chloë decided to leave Celtic Woman and resumed her solo career resulting in the newest member Mairéad Carlin to take Chloë's place. 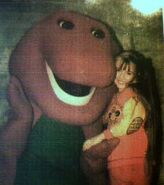 Chloë Agnew (at age 9) with Barney the Dinosaur

Chloë Agnew (at age 10) in The Young Messiah

Walking In The Air []

Chloë Agnew singing the song called "Walking In The Air"

"Vivaldi's Rain" (sitting near the creeks)

"Vivaldi's Rain" (wading in the water)

"To Where You Are"

Purple and light blue dress from the first CW tour

The water dress from the first CW tour

White dress from "A New Journey" in Slane Castle 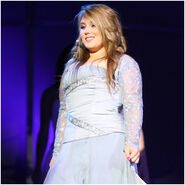 Bluish-gray dress from "A New Journey", the world tour

Blue dress from "A New Journey", the world tour 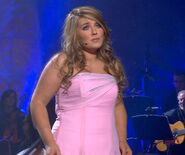 Pink dress from "A Christmas Celebration"

White dress from "Songs From The Heart"

Red céilí dress from "Songs From The Heart"

Pink gown from "Songs From The Heart"

Pink dress from the concert "Believe"

Golden gown from the concert "Believe" 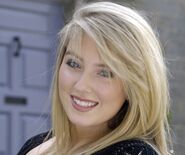 Chloë with her sister Naomi, their mother Twink and pet dog Mipsey

Chloë, Naomi, Twink and friends playing a board game

Chloë and Naomi Agnew with Máiréad and Karl Nesbitt 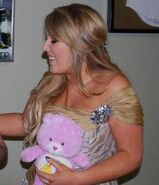 Just hiding in the red locker 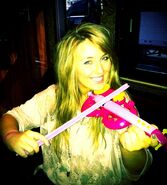 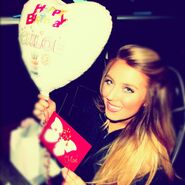 A heart-shaped balloon and a butterfly card

That is a BIG Hershey chocolate bar!

What a fantastic wave!

Don't be fooled. Chloë may be disguised as a panda bear, but all you notice are her arms and hair.
Community content is available under CC-BY-SA unless otherwise noted.
Advertisement